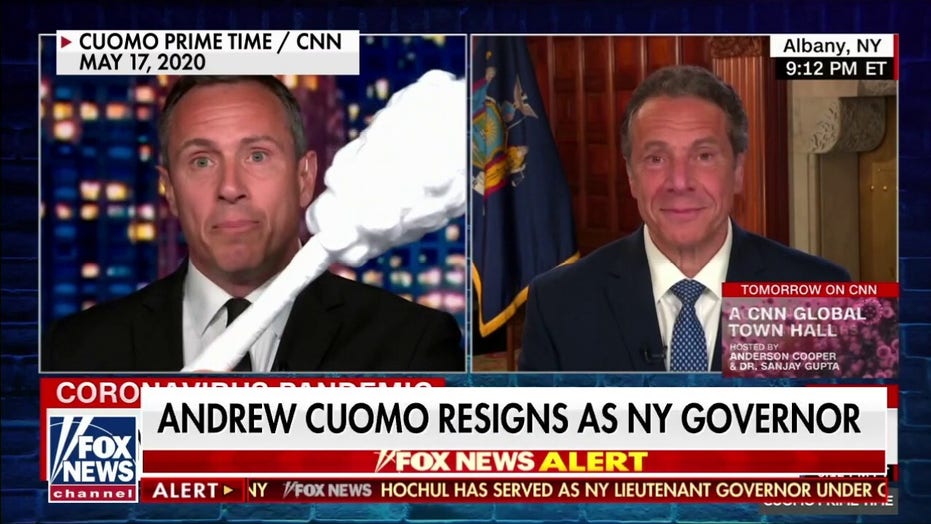 Fleischer: Chris Cuomo should be let go from CNN if still advising brother

New York Gov. Andrew Cuomo announced on Tuesday that he would step down amid an ongoing sexual harassment scandal, raising further questions about what CNN will do with his beleaguered little brother, star anchor Chris Cuomo.

CNN’s Cuomo was away from the network this week and wasn’t around for his big brother’s political downfall. But he’s caught up in the scandal himself, as the New York state attorney general concluded that CNN’s primetime host tried to help the outgoing governor fight sexual harassment allegations along the way.

A former CNN employee who worked closely with Chris Cuomo at times thinks the "Cuomo Prime Time" host will be allowed to return to his program after what has been called a long-scheduled vacation, largely because of his close relationship with CNN president Jeff Zucker.

A former CNN employee who worked closely with Chris Cuomo at times thinks the "Cuomo Prime Time" host will be allowed to return to his program after what has been called a long-scheduled vacation.

"My guess would be when he comes back, they'll have him open the show with a short, brief, ‘This is why I'm not going to talk about the tough situation that my brother is going through right now. And I will not speak to this again. And now let's get after it," and move on," Cuomo’s former CNN colleague told Fox News.

Cuomo’s former CNN colleague predicted that the embattled anchor will then quickly move on to the days non-Gov. Cuomo news but it would be "hard for him to not address it at all."

"I think there'll be a carefully crafted statement at the top and then he'll get on to, you know, slamming Florida," the former employee said.

New York Gov Andrew Cuomo announced on Tuesday that he would step down amid an ongoing sexual harassment scandal, raising further questions about what CNN will do with his little brother, star anchor Chris Cuomo.? (Kevin Mazur/Getty Images)

If Chris Cuomo is allowed back, as predicted, the next question will be what is he allowed to cover. Poynter Institute senior media writer Tom Jones questioned if Chris Cuomo would be able to fairly cover politicians that called for his brother to step down before the governor announced he would step down.

"CNN is in a bad spot here," Jones wrote last week. "Politicians that Chris talks about — Joe Biden, Nancy Pelosi and so forth — have called for Andrew to resign. Might that affect how Chris covers them? The fact that this is even a question is a problem for CNN."

CHRIS CUOMO AND HIS PROBLEMATIC YEAR AT CNN

A case could be made that Chris Cuomo could have an even bigger axe to grind now that Biden, Pelosi and other prominent Democrats have gotten their way.

CNN did not immediately respond to a series of questions, including whether or not Chris Cuomo will be allowed to address his brother’s resignation or whether the network will allow "Cuomo Prime Time" to cover politicians who called for the soon-to-be-former governor to step down.

If recent history is any indication, the former CNN employee doesn’t expect the network to put journalism ethics are the forefront of its decision making when the "Cuomo Prime Time" host returns from vacation.

"I hate the term optics, but the optics of it are just they handled it abysmally in my estimation," the former employee said, adding they left CNN on good terms and still keeps in touch with friends at the network.

"No one is going to pretend to dress the pig up and put curls on it and say that it's anything more than a pig. It looks awful because the network handled it poorly because they favored their relationship with him, you know, as being something, you know, sacrosanct and more important than the impartiality of being a straight news agency," the ex-staffer added.

The former employee feels CNN never should have allowed the Cuomo sibling to conduct a series of family banter disguised as interviews during the height of the coronavirus pandemic. CNN then banned Chris Cuomo from covering his brother once he became engulfed in scandals, further damaging the CNN anchor’s reputation in the process.

"They put Chris in a really, really bad place and I empathize with him because it’s his brother," the former employee said. "They should have stepped in and pulled him from the air, if you're not going to be able to cover a story of that kind of significance... they backed themselves into a corner with this one because upper management really, really likes Chris. It smacks of favoritism or cronyism."