EXCLUSIVE: A group of Black Republican lawmakers are urging the National Museum of African American History and Culture to "honor" Supreme Court Justice Clarence Thomas, saying the current exhibit "falls short" of representing him and that an update is "long overdue."

"This museum is a national treasure for our nation’s fabric – this is especially true for me as a Black American and Republican," Donalds wrote.

"Black History transcends political correctness and partisanship," he wrote. "Overall, the NMAAHC honors its mission, but it is unfortunate to see pitfalls likely driven by irresponsible bias."

"Clarence Thomas, associate justice of the Supreme Court of the United States, is a notable figure in Black history and American history as one of only two Black men to serve on the nation’s highest court," he wrote, calling Thomas, a descendent of American slaves, someone who "persevered to become a stalwart figure in the American judicial system and history."

"As a Black man who has a profound respect for the contributions Justice Thomas has propitiated for generations to come, this museum must encapsulate his life as it does for hundreds of other monumental Black figures," Donalds wrote, saying that "as it stands today," the museum "falls short" or representing his "achievements and life compared to his counterpart, the Honorable Justice Thurgood Marshall."

The museum has been criticized by Republicans in the past over its presentation of Thomas, 72.

Upon opening in 2016, Thomas was only mentioned in connection with Anita Hill – a former staffer of Thomas, who accused him in 1991 during his confirmation hearing, of making sexually explicit comments and unwanted advances toward her while she worked for him at the Education Department and Equal Employment Opportunity Commission in the 1980s.

Thomas denied the allegations and famously described the process as a "high-tech lynching."

A year after opening, the museum unveiled a new exhibit, displaying both Thomas and Marshall, the Supreme Court's two African American justices. Thomas replaced Marshall on the court after Marshall retired in 1991.

Thomas, in 2017, said the exhibit at the museum was created and installed without contacting him.

CLARENCE THOMAS IN NEW DOCUMENTARY: I WAS THE 'WRONG BLACK GUY' AND HAD 'TO BE DESTROYED'

The display, according to The Washington Post, features a photograph of Thomas at his Supreme Court investiture in 1991, a picture of him as an undergraduate at the College of the Holy Cross and a copy of Jet magazine with his image on the cover. 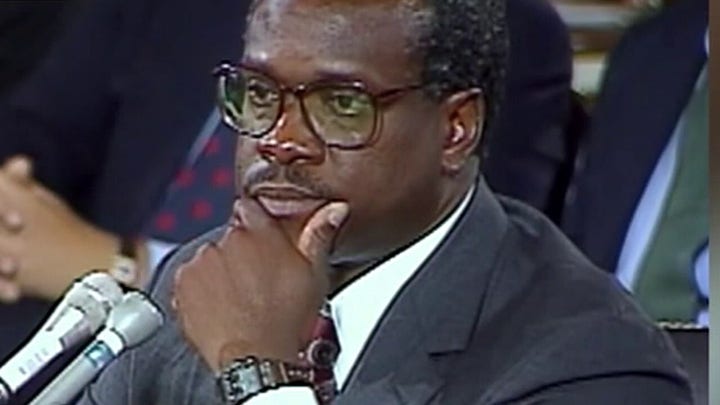 "Black history cannot and should not be political," Donalds wrote. "The American people deserve an unbiased assessment of the trailblazers in the Black community – it is time to honor Justice Thomas with this long-overdue documentation of his whole life and history and not the disingenuous effort displayed today."

"The story of Black America is a rich one full of towering figures that have left an indelible mark on American society," Sen. Scott told Fox News. "Justice Clarence Thomas’ achievement of being one of the only two Black Americans to ever sit on the Supreme Court should be celebrated and remembered in history."

Scott told Fox News that his "hope" is that the museum "would represent Clarence Thomas the same way they have other distinguished Black Americans like Justice Thurgood Marshall."

Owens also urged the museum to update its exhibit.

"As one of the only two Black men to serve on our nation’s highest and most distinguished court, U.S. Supreme Court Justice Clarence Thomas deserves unbiased recognition from the National Museum of African American History and Culture," Rep. Owens told Fox News, urging the museum to "appropriately honor the continued legacy of Justice Thomas, especially as we celebrate Black History Month and the many trailblazers who faced the odds to secure the dreams of future generations."

The National Museum of African American History and Culture at the Smithsonian did not immediately respond to Fox News' request for comment.