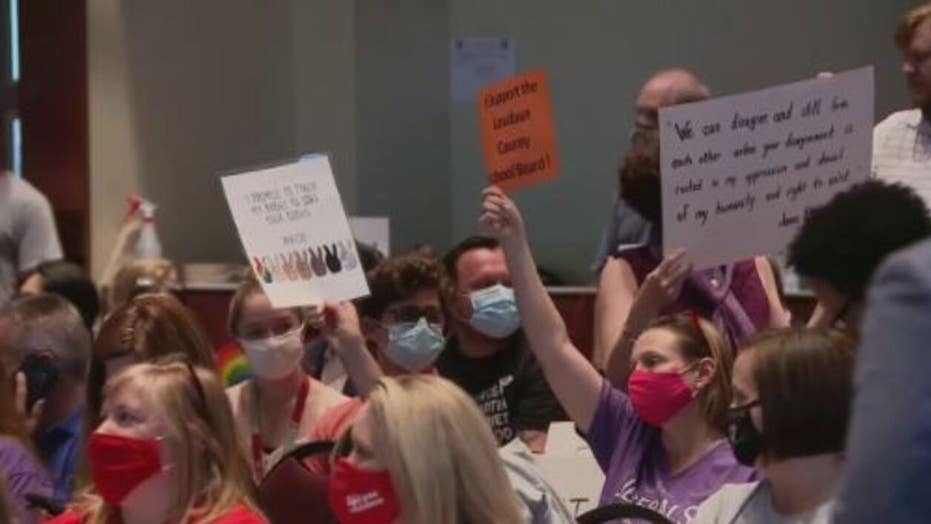 Tuesday's meeting came just a few months after physical education teacher Tanner Cross denounced the policies, telling the school board he wouldn't "affirm that a biological boy can be a girl and vice versa because it's against my religion. It's lying to a child, it's abuse to a child, and it's sinning against our God."

His subsequent suspension and lawsuit poured fuel onto an already fiery debate over free speech and identity in one of the nation's wealthiest counties.

That debate will pour over into the judicial system as Cross and Loudoun parents have already filed lawsuits on various issues. If passed, it's unclear how long policy 8040 will last given that its content is already being disputed in Cross' case.

A county judge previously ruled in favor of halting Cross' suspension, asserting that the county's decision represented an affront to free speech. Meanwhile, the county is appealing the decision to the Virginia Supreme Court.

Ryan Mooney speaks at a Loudoun County School Board meeting on Aug. 10.

Policy 8040, which the school board overwhelmingly approved, requires teachers to use preferred pronouns and allows "gender-expansive and transgender students" to participate in sports and other activities "in a manner consistent with the student’s gender identity."

Comments continued for hours after the meeting's scheduled start time of 4 p.m. ET. The board eventually called for a recess and said it would reconvene on Wednesday.

Opponents issued what seemed to be more intense denunciations of a policy affecting locker rooms and other facilities. Policy 8040 reads: "Students should be allowed to use the facility that corresponds to their gender identity."

Ryan Mooney, who identified as a former LCPS student, recounted his own alleged molestation and worried that the new policy would create loopholes for further abuse … I don't want the sexual predators to slip through the cracks, or [inaudible] these loopholes and these policies provide."

"I look at my little brothers and I'm reminded of the things I have gone through," he said. Choking up, he added: "I'm reminded that as a 13-year-old boy I was molested.

Mooney went on to say that he wanted to show love to individuals who struggled with their identity. "But the policies here today are tying the hands of parents, teachers, and friends … I didn't want to be here, but I owe it to future generations."

Others, however, suggested policies like 8040 were necessary for protecting children. April Little, who identified as a former LCPS student, wore a shirt that read: "Bad theology kills."

"I am a Christian and I am also a lesbian. Some faith communities are denying the dignity of transgender and gender-expansive people but I believe that all people are made in the image of God, who transcends gender," said Little.

"I also believe that bad theology kills. If it does not lead to human flourishing, it is not of God. There is a consensus among licensed mental health professionals that attempts to keep youth from expressing their true gender identities leads to depression and suicide."

Middle school teacher Andrea Weiskopf told the board that "all children need an ally, but our transgender children need allies now." Weiskopf was wearing a t-shirt that read "Protect Trans Kids" and a "Black Lives Matter" sticker.

"If you call yourself an LGBTQ ally but you don't believe trans girls are girls, then you are not an ally to children," she told the board.

Natassia Grover, however, lambasted what she called the board's "relentless onslaught against girls," taking special aim at fathers on the school board.

"I am so shocked there are fathers on this school board who support Policy 8040. As a father, you are in a role that is supposed to be protective of children's privacy, modesty, and safety," she said.

"The tiny minority of students who do not feel comfortable or safe in spaces with people of the same sex should be accommodated with a third neutral space rather than violating the basic rights of the majority of students."

Grover's daughter, Jolene, notably accused the school board of sexism earlier this year, saying it was dangerous to open up locker rooms this way.

A storm brewing inside and outside of the board meeting

As with previous meetings continued to be marked with feelings of disrespect and betrayal from others in the community.

Several commenters blasted the school board for allowing virtual remarks prior to those who had signed up for in-person speeches. Those individuals stood outside in the rain as they waited to enter the building.

Following several explosive meetings earlier this year, the board decided to only admit members of the public into the building if they signed up for comment. And last Friday, the school board announced that it would allow virtual comment – prompting scrutiny from critical residents.

Spokesperson Wayde Byard told Fox News: "The chair set the order last week. We publicized it when we announced the meeting agenda on Friday. The sign up period opened last Friday and anyone could sign up regardless of what topic they wished to address."

A man speaks at a Loudoun County School Board meeting on Aug. 10.

Some suspected the school system acted inappropriately. "I just want to say there is a special place in Hell for whoever decided it was okay to leave people outside in that storm," said one man, who was wearing a blue shirt that read "teach free speech."

Joe Mobley, who wore a Make America Great Again hat, used his time to stand in silence. At the end, he told the board: "You all have wasted enough of our time, so it's nice to get to return the favor."

At least two mothers – Elicia Brand and Jessica Mendez – got emotional imploring the school board to change its ways. Brand told the Board she was struggling in deciding whether to re-enroll her child in the school system.

Mendez was just one of many commenters to publicly denounce school board member Beth Barts. Many members of the school board are currently facing a growing recall effort, but Barts in particular appeared to irk commenters.

"One thing is very clear. A functioning school board will not be one that Beth Barts is a member of," said Mendez.

Barts did not respond to Fox News' request for comment. Byard told Fox News via email: "Mrs. Barts is an elected official. It would be inappropriate for the school division to comment on criticism of her."

The school board found plenty of support, however, as people thanked them for their efforts over what has been a challenging year for the county. Many called for unity, although the months of infighting appeared to leave long-lasting wounds in the community.

One commenter, who identified as Charlotte McConnell, held up a sign quoting James Baldwin. It read: "We can disagree and still love each other, unless your disagreement is rooted in my oppression and denial of my humanity and right to exist."

McConnell claimed to have been abused multiple times, but by "straight, white men."

Board Chairwoman Sheridan previously caught heat when she suggested that parents were engaging in "dog whistle politics" in their opposition to certain racial material in the district.