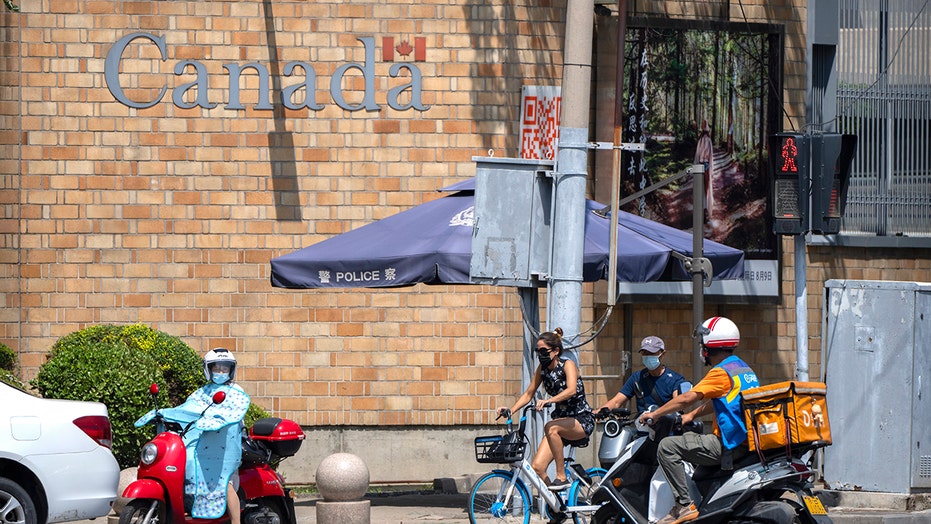 A Chinese court on Tuesday rejected a Canadian drug convict's appeal of a death sentence in what appeared to be an effort to step up pressure on Canada to release a detained executive of tech giant Huawei.

The Canadian government condemned the ruling and appealed to China to grant clemency to Robert Schellenberg.

Schellenberg was sentenced to 15 years in prison in November 2018 for drug smuggling. He was abruptly resentenced to death in January 2019 following the arrest of the chief financial officer of Huawei Technologies Ltd. in Vancouver. Meng Wanzhou was arrested Dec. 1, 2018, on U.S. charges related to possible dealings with Iran.

People wait to cross an intersection near of the Canadian Embassy in Beijing, Tuesday, Aug. 10, 2021. (AP Photo/Mark Schiefelbein)

The Higher People’s Court of Liaoning Province rejected Schellenberg's appeal and sent the case to the Chinese supreme court for review, as is required by law before death sentences can be carried out.

"We condemn the verdict in the strongest possible terms and call on China to grant Robert clemency," the Canadian ambassador to Beijing, Dominic Barton, told reporters.

"His retrial and subsequent sentence were arbitrary," Barton said by phone from the northeastern city of Shenyang, where he attended the appeals court hearing. "We remain deeply concerned by China's arbitrary use of the death penalty."

Separately, a former Canadian diplomat, Michael Kovrig, and a Canadian entrepreneur, Michael Spavor, were detained in December 2018 and later charged with spying in what was widely seen as an attempt to pressure Ottawa to release Meng.

Barton said he would travel later Tuesday or Wednesday to the northeastern city of Dandong to see Spavor. The ambassador said there might be a ruling in Spavor's case on Wednesday and said he had no details of when Kovrig's case might be decided.

CHINA HAS ENOUGH STOLEN US DATA TO CREATE ‘DOSSIERS’ ON EVERY AMERICAN, SENATE PANEL IS TOLD

Asked whether the three cases were linked to Meng's, Barton said, "I don’t think it’s a coincidence these are happening right now while events are going on in Vancouver."

Diplomats from the United States, Germany, Australia, and France attended Tuesday's hearing, according to Barton. He expressed thanks to them and to other governments for expressing support for Canada.

Two other Canadians, Fan Wei, and Xu Weihong, also were sentenced to death on drug charges in separate cases in 2019 as relations between Beijing and Ottawa deteriorated.

The United States wants the Huawei executive, Meng, who is the company founder's daughter, extradited to face charges she lied to banks in Hong Kong in connection with dealings with Iran that might violate trade sanctions.

A Canadian judge will hear final arguments in the next few weeks over whether Meng should be extradited. She has been living under house arrest in Vancouver.

Schellenberg was convicted of smuggling 222 kilograms (448 pounds) of methamphetamine, according to the court.